What a week!  The shops have been incredibly busy, and I'm coming up to 200 sales on Folksy - something I never thought I'd see.  As well as rushing around packing orders, there's been the weather to contend with.  Whilst we haven't had it as bad as the poor folk in the South West, we did have some amazing rainfall and winds.  Here is Lucca the Lab wondering why his regular walk is being swum by the ducks! 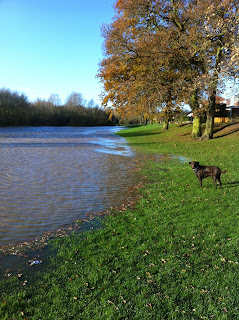 Shortly after, he worked out it was just like the beach and you could go crazy splashing in and out of the waters edge, so now he doesn't mind not having his usual walk at all.

I am persevering with the kumihimo and found a great tutorial for a twisted braid.  The lady is Norwegian will a passion for all things Japanese.  Her bracelets are absolutely stunning. 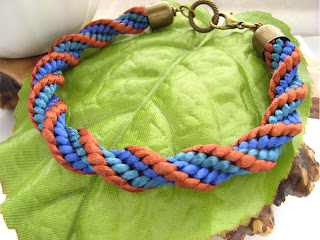 This is my effort with chocolate, teal (which looks dark blue on the photo) and sky blue threads.

The finishing is still tricky but I'm working on it, and this time I didn't superglue my fingers to anything more embarrassing than a scrap of kitchen roll!  It's certainly addictive though. 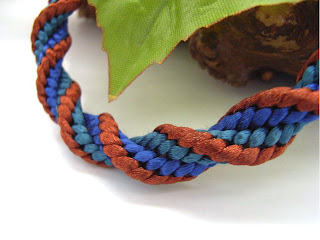 The biggest sellers in my shop are still the little cord bracelets, and I've added infinity bracelets to the range this week... 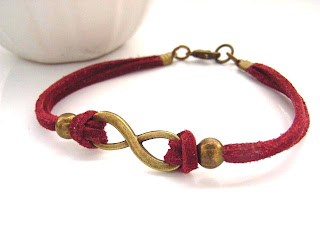 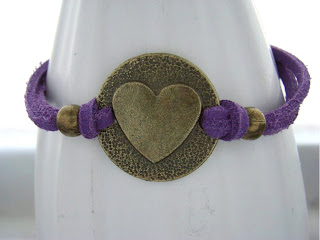 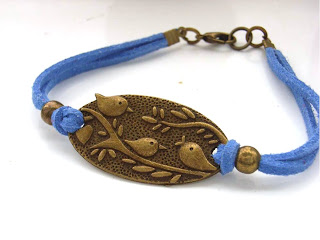 One lovely customer has ordered seven so far!

Hope everyone has a lovely week, and the weather settles a bit.

Here's the link to see what other crafty peeps have been doing this week. 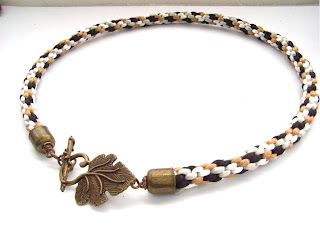 Remember last week when I was struggling with my ends?! Well, thanks to you all reminding me not to give up, I did persevere and found the larger Kumihimo ends I needed in the bronze tone to finish the necklace properly.

It's much tidier now, and I can think about starting my next braiding project.  There was almost a Sunday morning visit to A&E when I tried (thankfully unsuccessfully!) to glue the ends and the wire to my hand, but I'm sure with practise, it will all become much less hazardous.

I was lucky enough to go to the Hobbycrafts show at the NEC on Saturday and bought some lovely colour rattail, so watch this space for more braided necklaces and bracelet. 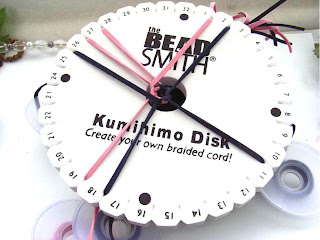 Here's a picture of the Kumihimo disc as requested, all set up with some pink and navy threads.

My only other make this week was a necklace and earrings set.  They are a bit of an experiment and the technique needs some refining (that means, the back side looks like a right dog's breakfast), but I thought I'd show them anyway.  I've nicknamed them the stained glass window set - they do look best in strong light where the gem colours look transparent.  Perhaps they need adapting into sun catchers or something like that - any ideas? 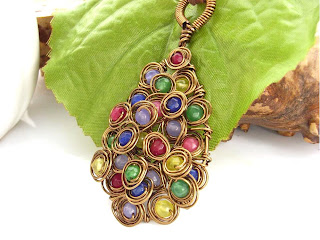 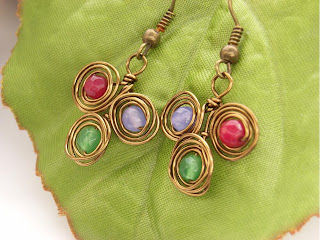 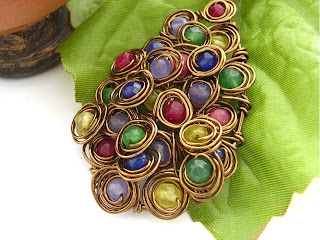 Last week, I gave in to temptation and bought a Kumihimo braiding starter kit.  It's an ancient Japanese craft and the real traditionalists do it with a beautifully crafted wooded disk. Mine is mass produced and made of foam, but if it keeps the craft alive, I'm all for it!  Anyway I had a go. 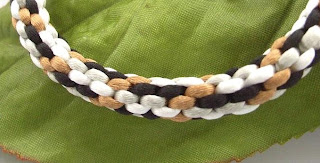 Making the braid is great fun and surprisingly easy.  The board has loads of numbers on it, but you don't need any maths for the simple braids.  All you need to do is keep to a simple pattern of moving the left and right cords and rotating the board.

I'm severely dyspraxic, so I have a lot of trouble with left and right (as well as spatial awareness, balance, co-ordination and a whole variety of other stuff which means that some days just remaining standing without falling over is an achievement in itself!) but this is actually quite good for me to practise.  After a little while, you can do it whilst watching Coronation Street (although you don't want to miss any of the Sue Johnston, Nigel Havers and Sue Nicholls storyline which has been comic genius with three of our acting national treasures, IMHO) 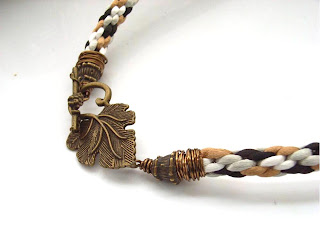 So far so good.  Then I came to the end.  You are supposed to then 'squish' (technical terms!) the ends into a bead cap or stopper, having first 'whipped' them by tying them with a piece of cotton.  My ends were way too big (it's been said before, LOL!)  I think the bead caps in the kit were a bit small.  My maths isn't brilliant, but I'm struggling to see how eight threads each at 2mm diameter with cord wrapped round them can fit into something with a 6mm diameter. 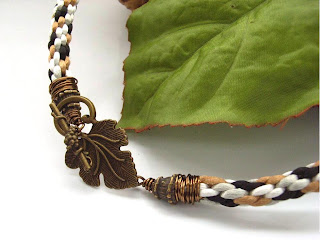 I tried with a bead cap and a bit of wire wrapping but it's not up to standard really.  Going to have to do some more research as the glue in end caps don't seem to be widely available in bronze tone in the large size.  Anyway this was the idea - to combine the braid with this ornate leaf clasp so that it can be worn at the front of the necklace or the back.

I'm terrible at abandoning things when I hit the first bit of difficulty, so I'm relying on you lot to keep nagging me to carry on with this one, OK?

In the meantime, here's a link to what other crafty folk have been making this week.

I've had the pleasure of doing lots of swaps or trades on Folksy and Etsy recently, and got some beautiful handmade gifts in return.  I can't posts pictures of what I've received, as they are mostly Christmas gifts for friends and family who might just see this blog!  So I've picked some random but stunning creations from each of the shops I've traded with.  Thanks to everyone who has agreed to swap with me - it has to be the best way to shop.  Click on the picture or the shop link to visit.  Enjoy!

Art in Wax on Folksy

Girl of the Sixties on Folksy

AdienCraftsandGifts on Etsy (it's just the bandana for sale, not the gorgeous Schnauzer!)

Handmade by Edwina on Folksy
Fabulous shops, aren't they?