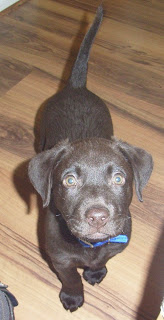 A year ago yesterday we brought this small brown puppy aged 12 weeks into our lives. We’d just got back from holiday and had been madly preparing the house and garden – imagining we had everything puppy-proofed. Of course, we were totally wrong!!

Lucca is named after the beautiful Italian town in Tuscany we were visiting when we decided it was time to get a dog. It’s the birthplace of the composer Puccini whose music we both love.

Both me and my other half were brought up in houses with dogs, but we’ve never had one ourselves. With work, we’d restricted ourselves to cats, but now my other half works from home, so having a dog became practical.

A year later we both agree that we’ve never been more tired, or more fit! Lucca has a main big walk each day, usually with a swim. He also has about three other little outings to the small lake, stream and woods we live near. As a Labrador from working stock, he’s extremely active and has the energy to run all day, but he also loves his deep and dream-filled sleeps. Our rule about not going on the sofa lasted about two hours. He was born in a stable on a working farm, but he seems to have a real instinct for creature comforts!

Of course, we are biased, but we think the world of him. He’s taught me so much about the simple pleasures of life and about living in the moment. We’re both devoted to keeping him happy and healthy.

The pictures show him doing some of his favourite things – swimming, football, digging and yawning!

I hope you’ve enjoyed meeting Lucca. He’ll be featuring back here, I’m sure! 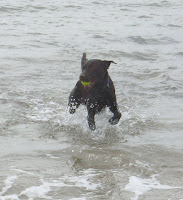 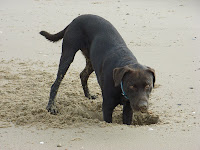 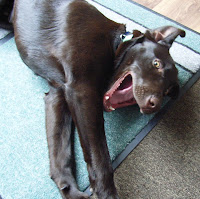 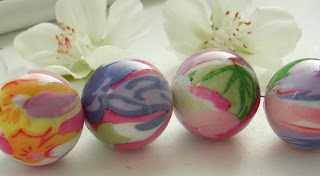 Two major projects on the go for today: Amazonite and baroque pearls strung and knotted on white silk, and a new departure for me, acrylic beads.

I bought into the acrylic craze last weekend at a Bead Fair. They are large and bright white, with pink, green, blue and yellow flowers artfully painted on them - what 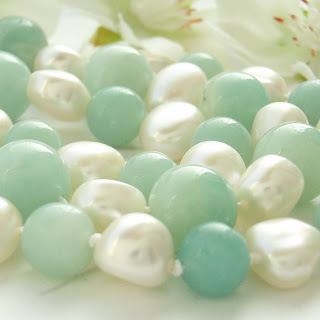 girly girl could resist those?

Anyway, turns out I have similar sized acrylic faceted smokey brown stones and just as I strung them, they really started to pop!

So I’m off to finish off, and hopefully post photos later.