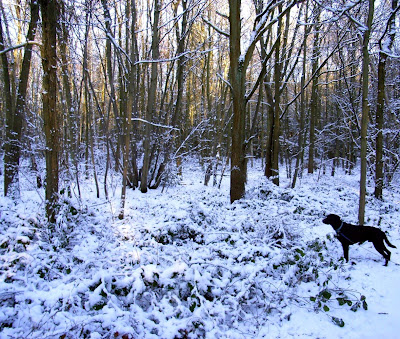 As the snow is becoming a bit of a distant memory here, thought I'd record a couple of pictures. I know it was really inconvenient and dangerous for some folk, but despite falling over and breaking my arm, I really enjoyed the way it made everything look and feel so fresh. And it reminded me of my childhood further north, and being sent home early from school and spending afternoons sledging!

For Lucca the brown labrador, it was even more exciting. Most of his activities consisted of eating snow, but here's one of him pausing to pinch (and eat) the carrot nose from Mr Snowman... 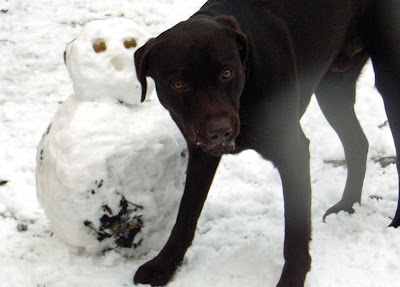 ...and surveying the lake and wondering why he can't have a swim! 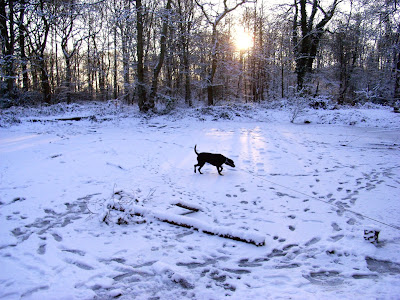 Hubbie always keeps a note of what I've read. This year, the modern novels are:

I've got eclectic taste, as you can probably see! I like a page turner, and I have to read everything by Ruth Rendell/Barbara Vine (but not the Wexford novels) because you can't put them down and she writes so well. And a colleague at work introduced me to Paul Auster this year.

If I had to pick one to recommend, I'd be hard pushed, but would probably say 'The Northern Clemency' - it's a great read and especially if like me, you grew up in Sheffield and then moved, it will fill you with nostalgia. Blackmoor and Gods Own Country are also excellent 'Norh of England' novels.

What do you think of the list? What are your picks of 2009?
Posted by Blue Forest Jewellery at 11:10 1 comments