Places to return to...

Travelling has been curtailed a bit this year by the arrival of Lucca, so I've been reflecting on a few of my favourite destinations. One of the most interesting, and seemingly least well known, is Kihi Island in Karelia, Northern Russia.

We were on a boat between Moscow and St Petersburg in 2003 when we pulled up at the island. In late September, the northern light was beautiful and it gave the small island a really magical appearance. It's what the tour guides describe as a 'green stop' - apart from these fabulous buildings. Apparently, the air is so pure around there that rare mosses and lichens grow on the trees. There was certainly ever shade of green you could imagine on view. 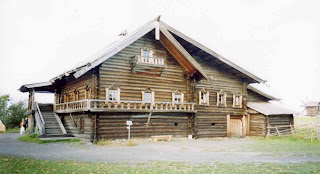 Basically, it's an open air museum of wooden architecture. The church is the most spectacular with its majestic wooden onion domes dancing against the white northern sky. There is also the farmhouse where inside you can view what life was like for those living there - anything but romantic given the harsh winters and stark conditions.

You can read more at http://www.offbeattravel.com/kizhi-island.html if you're interested.

It felt like a privilege to go somewhere so off the beaten track but so stunning and different.


Where have you been that you would like to return to?
Posted by Blue Forest Jewellery at 12:52